If you’re driving an old rusty car around the grocery store parking lot, you won’t really notice if a wheel is out of balance or if a tire is a bit flat, but if you’re taking a corner in an F1 car on a track, small details become critically important. One loose bolt or slight misaligned part could destroy the car.

As athletes become increasingly competitive, they move along a continuum that’s not too different from those cars. Training intensity increases, as does training volume. You start doing things harder, faster and longer.

A small imbalance that would never become an issue for a recreational jogger putting in five miles a week could rapidly accumulate into a torn ligament and months or years of recovery time for a professional runner whose training volume is exponentially higher and more intense.

Monitoring movement quality and tracking how your body responds to training becomes increasingly important as you train closer and closer to the edge of your peak performance. This is why the best athletes also generally have the most coaches.

Like a race car needs a team of experts to keep everything running smoothly, high-performance athletes also require a growing array of insights to ensure their progress.

A good coach can carefully monitor movement quality, but even with decades of experience, it’s logistically difficult to detect small variations in movement patterns or joint angles as they change over time. It’s also not something many people outside of certain well-paid professionals can afford. Most high-level collegiate athletes, for example, train in group settings in which their coach’s attention is divided amongst many different athletes from moment to moment.

Many sports also require extended training that can’t be directly supervised. Unless your coach is cruising alongside you in a golf cart with a video camera during your training runs and bike rides as a triathlete, there is no way to know what subtle changes in your movement pattern could be cropping up in the middle of a workout when you’re under fatigue.

Not having a feedback loop for movement quality during training increases the likelihood that training will drift away from a desirable standard until something finally breaks.

This is where Cipher Skin comes in. 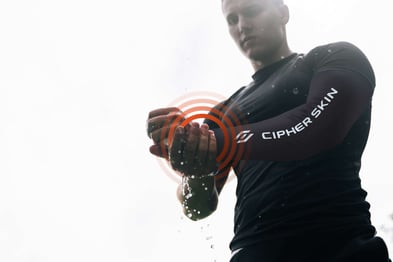 Cipher Skin's technology provides feedback in real-time during training and can detect variations in movement patterns down to fractions of a degree of motion.

By continuously monitoring highly detailed 3D movement data alongside the status of your body’s autonomic and cardiac systems,

Cipher Skin can rapidly detect signs of overtraining or potential injury long before you would otherwise be able to identify them.

This means that you don’t have to wait for your body to provide feedback on a dangerous trend in your movement patterns in the form of chronic pain or a new injury.

With Cipher Skin, you can train at high intensity and push yourself to the edge of your body’s limits while knowing that your training is safe and effective.