The 6th Vital Sign – Why Movement is Critical Health Information

The 6th Vital Sign – Why Movement is Critical Health Information

The gold standard of medical care includes vital sign measurement at every visit. Though there is some debate about what constitutes a vital sign, most providers agree that heart rate, blood pressure, blood oxygen saturation, temperature, and respiration rate are the most vital of vital signs.

Vital signs are the medical equivalent of the gauges on the dash of your car. They provide a quick at-a-glance picture of how your body, a complex machine, is doing at that moment in time.

Aside from these five standard readings, there is a sixth sign that is just as important and in fact, provides better insight into how a person is actually doing: your body’s movement. Motion is a sixth vital sign.

Think for a moment about walking down a busy city street and navigating your way through the crowd. A split-second glance at someone moving can often reveal quite a lot about them. You can sense if someone is angry, inebriated, young, old, injured, or trying to catch your attention.

A growing area of research is finding that subtle changes in the body’s movement can indicate anything from a susceptibility to shoulder injuries to the early stages of neurodegenerative disorders. 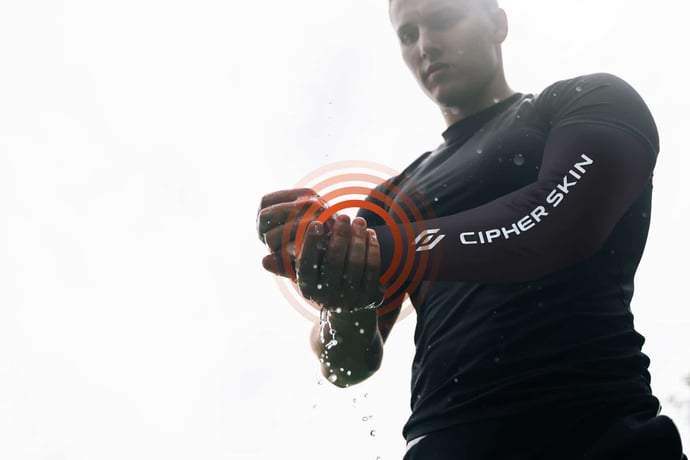 A 60-year old male undergoes an annual physical with his doctor. He puts on the Cipher Skin BioSleeves during his exam and walks around the room. The data from the sleeve shows a decrease in arm swing and axial rotation amplitude, with less smoothness than last year. This change in movement patterns, though subtle and difficult to see with the naked eye, can indicate the early signs of a progressive neurodegenerative disease.

By identifying these markers early, physicians can proactively identify, monitor, and manage.

Parkinson’s disease signs and symptoms, progressive and debilitating neurodegenerative disease, develop slowly, and begin to manifest years before a formal diagnosis is possible. Early identification and treatment are critical to managing the disease and its progression. Reduced arm swing during gait has long been a classical marker of Parkinson’s disease.

Recent research has focused on using gait analysis to identify variations in arm swing and axial rotation that preclude the onset of Parkinson’s disease while still in the prodromal (from the Greek for “running before”) stage, prior to a formal diagnosis. That is, disease susceptibility can be assessed in otherwise healthy people via gait analysis, allowing for more rapid identification of high-risk individuals. Earlier identification of disease susceptibility allows for earlier interventions that can mitigate and slow disease progression.

During gait, the two primary indicators of prodromal motor features (the earliest detectable signs of future Parkinson’s disease) are decreased arm swing amplitude and axial rotation. This is the total distance that each arm reaches forward and back while the subject is walking, as well as the amount of rotation occurring at the thoracic spine combined with protraction and retraction (reaching forward and pulling back) of the shoulder blade across the ribcage. Side to side asymmetry of these movements is another indicator of prodromal status.

A highly experienced professional may be able to pick up these subtle signs. However, it is extremely difficult to quantify subtle early signs and track their progress during the prodromal period. The Cipher Skin BioSleeve changes that.

The Cipher Skin BioSleeve enables detailed measurement of this entire picture. The sensors on each sleeve measure transverse, frontal and sagittal plane arm swing amplitude as well as elbow flexion/extension and wrist rotation during gait. At the same time, the sleeve enables the measurement of axial rotation by tracking the reciprocal amplitude of rotation at the shoulder of each arm.

The BioSleeve’s wireless single-sensor design incorporates multiple biometrics, including heart rate and oxygen saturation. This allows the wearer or a researcher to observe not just the variations in gait mechanics that preclude Parkinson’s disease, but to see other possible indicators such as aberrant heart rate variability and changes in SPO2 saturation. By creating a more complete picture of the body’s inner and outer workings, the Cipher Skin BioSleeve provides a window into more of the body’s physiological interactions than ever before, providing a more accurate, user-friendly and versatile diagnostic tool.

Neurodegenerative disorders are merely one use-case possible with the accurate measurement of the body’s 6th vital sign.

See how the BioSleeve can change your life.