How the BioSleeve Can Help Prevent Shin Splints

The Cipher Skin BioSleeve is a digital compression sleeve that can be worn around the arm or knee, capturing objective data that can help many athletes that physical therapists and athletic trainers work with.

In case you're new around here, the BioSleeve — Knee directly measures everything happening above and below the knee joint using our patented sensor technology. Among many outputs, the BioSleeve can directly measure critical aspects of running gait, providing real-time feedback on form to help reduce injury risk in runners.

One of the most common injuries in runners is shin splints. Let's take a closer look at factors that contribute to shin splints, and how Cipher Skin can impact prevention.

The term shin splints can mean many things. It's used to describe any type of pain in the medial tibia, making it a pretty broad term. Shin pain could be caused by anything from mild chronic training stress, to more severe issues like muscular tears or stress fractures.

Another contributor could be a condition known as exertional compartment syndrome, which causes pain, swelling, and disability due to excessive pressure within the muscle compartments of the lower leg. Though the exact mechanism is not yet fully elucidated, the basic mechanism seems to be that muscles in the lower leg swell and expand in response to chronic exercise, while the fascia that encases those muscles remains unchanged and does not provide space for expanding muscle. The resulting increase in pressure can be quite painful.

Why Early Detection is Important

10-20% of all running injuries involve shin splints. Shin pain also accounts for 60% of all lower-body overuse injuries. Severe shin splints can be very painful and derail an athlete's training, forcing them to miss training, or even skip entire seasons, in order to recover. This makes the early detection and prevention of shin splints an important consideration for any runner.

There are many subtle factors within a runner’s gait pattern that affect the repetitive stress they place over their shins, increasing the risk for shin splints.

Vertical loading rate is the measure of how much force is being transferred vertically into the ground through the foot and lower leg of a runner. More efficient runners have decreased vertical loading rates because more of their energy is used for forward, horizontal propulsion rather than being wasted with a vertical motion that doesn’t increase running speed. Factors such as running cadence and vertical oscillation strongly affect vertical loading rate and shin splint risk.

Knee flexion excursion is the measure of how much motion the knee joints have while absorbing and generating force. For example, if someone is recovering from an ACL surgery, their recovery progress can be assessed by how much their knees move when they hop up and down. Greater knee movement while hopping means better knee function, and better progress in recovery. The same idea applies in running; “stiffer” runners have less knee flexion excursion with each stride and are less able to attenuate shock. When the knees mitigate less shock, that increased impact force is then transferred through the shins with each stride.

During running, the body experiences vertical forces equal to 2.5 - 2.8 times the runner’s bodyweight. If the tibial is angled inward or outward rather than positioned vertically and in line with this force vector, it can increase bending forces on the tibia with each step, which elevates the risk for stress fractures or shin splints.

Every one of these factors can be changed and improved with training. The problem is that in order to assess these factors, you need a lot of technology that mostly exists in labs: things like motion capture video technology, pressure-sensitive treadmills, and multiple accelerometers taped to your shins. Smartwatches can estimate a few of these measures, like cadence and vertical oscillation, but they’re only a rough guess at best — trying to extrapolate what the lower body is doing based on the movement of your wrist. 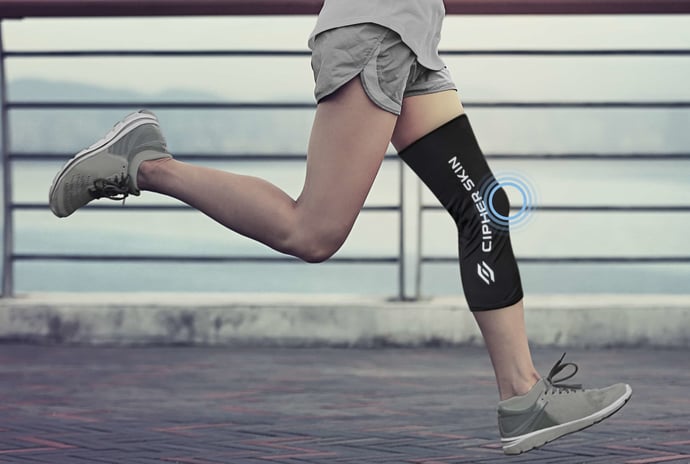 This brings us back to the Cipher Skin BioSleeve.

With Cipher Skin technology, trainers and therapists can objectively measure the many mechanical factors that affect the risk of shin splints or other lower-body injuries. With real-time visualizations of motion in the Digital Mirror®, changes to running form can be tracked and manipulated. We can look at the angle of the tibia, running cadence, knee flexion, and eventually force. We're also working on a software system where users receive real-time warnings mid-workout if they start to break down under fatigue and move in a way that increases their risk of injury.