Turning Motion into Data with the Cipher Skin BioSleeve

The human body is a data-rich and complex system, ripe for quantification and analysis.

In the past, we have monitored the body through the lens of reductionism: each biometric was measured as a standalone piece of data. Outside of a lab or hospital, we typically see heart rate or step count being monitored independently through distinct devices.

This form of reductionism is useful, but it has limits. The next step in technology and methodology must move beyond one-off measurements. Instead, the goal should be to visualize not only individual subsystems of the body, but their interdependencies with well-organized data sets.

The human body should be regarded and explored as a complex system, and we should monitor multiple biometrics simultaneously and analyze the web of interactions between subsystems. Measuring and organizing these data over time will reveal patterns — allowing outcome prediction and early interventions.

The Cipher Skin BioSleeve is a digital compression sleeve. It contains a network of interconnected sensors comprised of flexible, durable layers of a conductive polymer sandwiched in between two layers of an insulating substrate. The modularity of our underlying technology allows for the attachment of multiple sub-sensors, which capture motion and biometric data.

We currently have both arm and knee smart sleeves, and are producing leggings, shirts, and undergarments. 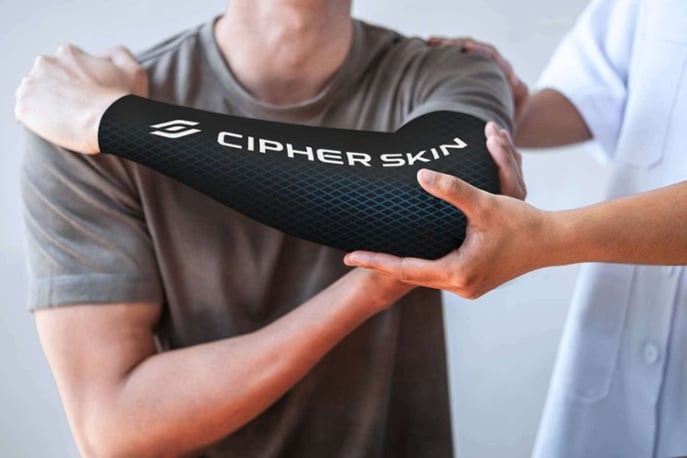 Cipher Skin’s patented technology encapsulates the body and creates a smart skin to which any number of sub-sensors can be wirelessly attached.

The Cipher Skin BioSleeve moves as the arm moves, detecting range of motion and producing an image of complex motion that we call the Digital Mirror®. Our sensor-circuit powers and transmits data from sensors like heart rate and oxygen saturation to create a continuously updated, comprehensive picture of multiple metrics and their interactions, at the same time, via the same circuit, and on the same timestamp as the motion data in real-time.

The BioSleeve powers a never-before-possible form of measurement: the real-time 3D motion of an object. Specifically, the data collected by the BioSleeve is displayed in the Digital Mirror®, which shows a striking 3D visualization of the body as it moves in real-time.

With this software, you can simultaneously view, track, and measure:

This adds a unique and powerful metric to the longitudinal data set, which plays a crucial role in many of the body’s behaviors and interactions.


The Digital Mirror provides an immediate feedback loop which can be utilized by anyone, from the wearer to a physical therapist, athletic trainer, or orthopedist. Over time as data sets are accumulated and analyzed, they open the possibility for not just immediately sensing an event — but predicting the event, too.