When we think about how breathing affects performance and how athletes feel from day to day, we generally think about gas exchange. Through respiration, athletes take in fresh oxygen and release the carbon dioxide that the body produces as a byproduct of metabolic activity.

Breathing impacts oxygen levels, yes, but it also affects the entire body in other ways.

With every inhale, the lungs diffuse blood with oxygen that is sent to our working muscles. As those muscles break down oxygen to power the body, it produces carbon dioxide — which gets shuttled away in veins back to our lungs, where it's expelled when we exhale.

This gas exchange takes place in the lungs through networks of tiny blood vessels known as capillaries, and in millions of alveoli. Alveoli are cup-shaped structures within the lungs that look similar to bunches of grapes on a microscopic level. Alveoli and capillaries each have very thin walls (they're roughly .00004 inches thick) through which gases can move.

Inhaled oxygen goes from alveoli to capillaries and then into the bloodstream. Carbon dioxide moves from the blood to capillaries and then out through the air in the alveoli. When we think about the role that respiration plays in our body, this is the first thing that comes to mind- air. We think of oxygen in and carbon dioxide out. Obviously, this is an important factor, but it’s not the entire picture.

For example, when we inhale, the right ventricle and right atrium of the heart, as well as the thoracic superior and inferior vena cava, see a decrease in pressure alongside the lungs. This pressure drop causes expansion. Just as the lungs fill with air, the right ventricle, right atrium, and superior and inferior vena cava also expand and fill with more blood. This preloads the cardiac chambers and increases how much blood the heart is able to move with each beat.

This works differently on the left side of the heart; when we inhale, blood flows toward the lungs and transiently decreases the flow of blood to the left atrium of the heart. But, as we exhale, lung deflation causes blood flow to increase from the lungs to the heart, which increases the flow of blood into the left ventricle. What is the net effect of these mechanisms? Increasing the rate and depth of breathing directly facilitates increased venous return of blood to the heart, as well as the volume of blood moved per beat by the heart ventricles.

In short, our breathing drives our cardiovascular system and our lungs. This makes the rate and quality of our breathing a crucial factor for physical performance and general well-being. Yet we rarely pay attention to it, and the fitness gadgets on the market all fixate on measuring things like heart rate. 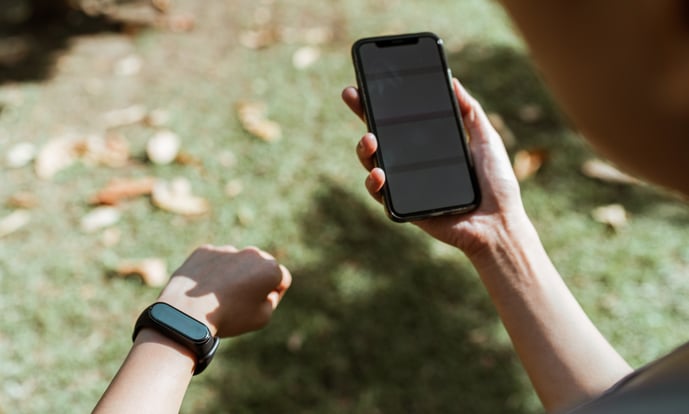 What About Heart Rate?

Heart rate isn’t directly controllable. Instead, it’s the product of other processes, like how breathing interacts with physical movement. Yet the wearable industry focuses on small, isolated pieces of data that we have very little control over.

The reason? It’s easy. It’s not that heart rate is the only or even the best thing to pay attention to if you’re interested in improving health and performance. It’s simply an easy thing to make and sell.

The technology for measuring heart rate has been around for decades. However, the technology needed to accurately monitor respiration in real-time is only just reaching mass-market use.

Cipher Skin is an industry leader in this technology. Our patented technology allows athletes to wear a smart compression sleeve that can monitor not just heart rate and O₂ saturation. We're also working on how to track highly accurate measurements of respiration rate and quality.

This will be a game-changing level of biometric monitoring because it opens the door to one of the most powerful processes in the body that we can actually control from moment to moment as we train, compete, and recover. Stay tuned for updates on our progress as our team of engineers works to bring this technology to the world and change the way we train and perform.